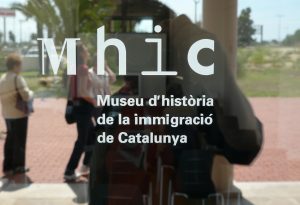 The History of Immigration in Catalonia Museum (MhiC) opened its doors in 2004. It is therefore a museum of the 21st century, with a clear educational vocation for the citizenship, where the creation of the Heritage Fund is open and participatory.

The content of MhiC is articulated along the three areas of its permanent exhibitions:

Humans in motion introducing us to the exhibition, begins by presenting the migratory processes of human being, through a conceptual and terminological perspective, in order to familiarize our public with the naturalness of the migratory phenomenon and the global vision of this concept.

The Sevillano is the second exhibition area, that approaches the most representative aspects of immigration to Catalonia, during the twentieth century, departing from the causes and the consequences in our territory. Here, what stands out is the part of the testimony as generator of the heritage fund and as an agent and producer of the migration discourse. The protagonists of the internal migrations in Catalonia speak in first person, and they accompany us on a departing trip, while we sit in an original train wagon of 1959 that takes us to a definitive moment of the history of immigration in our territory.

Finally, we take off to globalization again; Espai Migrar examines 21st century migrations through a prevalent perspective, from our actual present and most immediate future.

MhiC is an institution of reference for its content, a small local museum, that through a modest perspective and opts to boldly raise questions about a universal reality such as human movements and migrations. It is managed from the Area of Culture of the Sant Adrià de Besòs Town Hall and is part of the Network of Museums of Ethnology of Catalonia and the Network of Local Museums of the Diputación de Barcelona.

Methodologically, this museum cannot be understood without the participation of schools, the educational community, the university, migration collectives, associations, NGOs and the general public that consolidates the museum’s discourse day by day with its contributions, material donations for the collection, (Catalogue: The memory of the silenced objects) and the frequency of museum in accordance to their needs and emotional ties with it.

To all of them, thank you for helping us grow along with MhiC.

This website uses cookies to improve your experience while you navigate through the website. Out of these cookies, the cookies that are categorized as necessary are stored on your browser as they are essential for the working of basic functionalities of the website. We also use third-party cookies that help us analyze and understand how you use this website. These cookies will be stored in your browser only with your consent. You also have the option to opt-out of these cookies. But opting out of some of these cookies may have an effect on your browsing experience.
Necessary Always Enabled
Necessary cookies are absolutely essential for the website to function properly. This category only includes cookies that ensures basic functionalities and security features of the website. These cookies do not store any personal information.
Non-necessary
Any cookies that may not be particularly necessary for the website to function and is used specifically to collect user personal data via analytics, ads, other embedded contents are termed as non-necessary cookies. It is mandatory to procure user consent prior to running these cookies on your website.
SAVE & ACCEPT